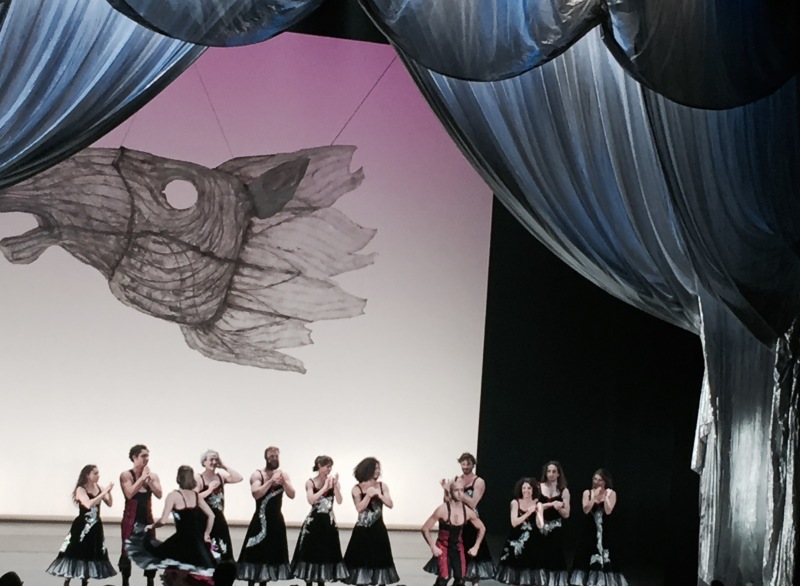 I lost myself to a dream two weeks ago when I watched acrobats perform in Compagnia Finzi Pasca’s “La Verità” at the Brooklyn Academy of Music. I rediscovered unencumbered childhood delight and wonder, and laughter that rises up just because without any strings attached–no sarcasm, no wry humor–just pure laughter. All of it derived from watching comical dances, contortionists, musicians, dancers, and aerialists fly, embrace, swing, and spin.

In addition to the performers, a Salvador Dali painting, which takes up the entire stage on a huge canvas, divides the acts. There are the performances that happen in front of the curtain where the actors engage with the audience to make sense of what is happening and why the painting exists. And then there are the magical scenes that happen once the large painting disappears where Dali-esque like images parade around on the stage. And some elements of the painting come to life such as a red cane and dandelion heads.

The painting was originally created for Léonide Massine’s 1944 ballet “Mad Tristan.” In it one figure clutches its bony ribs while the other extends skeletal hands. One figure has a dandelion head while the other has branches growing out of its’ crown. To me the painting represents life and death and its presence raises the question of what’s real–the show in front or behind the curtain? What’s real, the bamraku puppet or the contortionist who twists his body just like it?

The performance inspired me to think about what grows at the edge of imagination. How as artists and writers, we can draw on fantastic elements only witnessed in dreams and somehow make them a reality in our creative productions–what we put on the page or the stage.