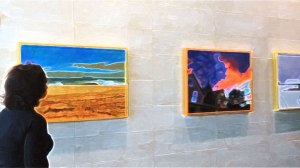 When I arrived at the cold, corporate lobby at the corner of Greene Street and Christopher Columbus, I didn’t expect to see the Jersey City sky I am so often mesmerized by at sunset. But there it was painted onto a 30×40 inch canvas in brilliant hues of purple, red, and orange. There were gorgeous clouds that loomed above shadowy trees and a house – the sky visible in its windows. I stopped in front of the painting thinking, “I know that sky.” But it wasn’t Jersey City. It was the Ocean Grove sky artist Alan Walker had captured on a visit to friends.

Fellow writers continued to stream into the light-filled lobby. It was a breezy Saturday afternoon in October and we had arrived at stop number seven on the Jersey City Artists Studio Tour. I would spend the day strolling the city streets with my fellow Jersey City Writers exploring cafes, galleries, and studios in search of inspiration.

Like striped zebras studying spots on a leopard, the writers questioned and pondered and mulled over the art at each stop. We are different animals but we both have the mark of creativity. Whether via oil or ink, we all have a story to tell. And sometimes we borrow inspiration from each other. 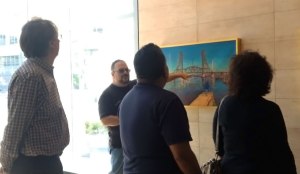 Art has a way of fueling the imagination. Writers sometimes fill in the details of a painting with characters. I visualized a woman smoking a cigarette on the porch of a ranch house in a snow-filled landscape. I also thought that there was the making of a science fiction novel when I saw a sculpture of a white cat with a metal ruler in place of one of its legs.

While I may not return to the sci-fi cat thriller idea, I am most certainly returning to the purple cloud-filled sky to see if there is a story to be told. It starts at the sunset’s magic hour when the tall glass buildings downtown reflect deepening shades of blue before being taken over by twilight. The light rail sounds in the distance as it travels across tracks laid down on top of the old Morris Canal route. Someone stops in front of the old, abandoned building at 86 Essex and lingers at the gate a bit too long when a child’s face appears on the fifth floor…